The recent reaccreditation of Martin Luther King Jr. Community Hospital provided another opportunity to spotlight a remarkable institution and its creation.

The area’s previous hospital, the old King/Drew Medical Center — “Killer King” in popular parlance — had its Joint Commission accreditation revoked in 2005 and the institution was closed, ceasing to even exist as an entity, in 2007. A new organization had to be created from scratch, with no connection of any kind to its predecessor, including its clinicians, staff, volunteers, and location.

The very concept of the brand-new hospital began with specific goals in mind, including creating a culture that prioritized safety, community service and providing the very best in health care technology and innovation. How did the forces behind MLKCH use the dissolution of a failed system to create a brand new, dynamic and robust one?

Through a commitment to quality, safety and innovative processes at every level.

“We were able to build a culture of safety early on,” says Elaine Batchlor, MD and CEO. “We had the benefit of being a startup, which allowed us to put systems in place from the beginning.”

That required a complete rethinking about how to design, finance, build and manage a privately operated state-of-the art safety net hospital in an area with Los Angeles County’s highest rates of poverty and poor health.

“We knew we had to regain public trust — anything less than the ‘Gold Standard ‘wouldn’t be enough,” said John Fisher, MD and CMO.

Those efforts were crowned with a Joint Commission review a few months before MLKCH opened. It passed with flying colors, and Politico reported at the time that MLKCH “is the hospital of the future.” The Los Angeles Sentinel wrote: “Today is indeed a good day for Los Angeles. Accreditation by the Joint Commission clears the final hurdle to restore quality hospital services at the MLK Medical campus and marks the beginning of a new era in health care delivery in the Willowbrook community and beyond.”

Upon its opening the Los Angeles Times reported that, “Experts agree that the new facility has adopted some of the best standards and technologies in the health care industry, capitalizing on a unique opportunity to design the hospital from the ground up.”

“Getting the hospital established was the most challenging thing I’ve done in my career,” Dr. Batchlor told the Los Angeles Business Journal. “There was a lot of skepticism that it could be done, and there was the legacy of the old public hospital that closed eight years earlier that had to be overcome, but we did it.”

In preparation for their recent reaccreditation survey, which takes place every three years, Edna de Leon, MLKCH’s Vice President of Quality, said, “We looked at what the Joint Commission was measuring and compared how we were doing ourselves against industry norms. That helped us set baselines and targets for improvement.”

Early on MLKCH achieved HIMMS level 7 for use of health care information technology, a level achieved by only 6.4% hospitals in the nation. Patient satisfaction scores for the hospital are among the top 10% in the nation. In the spring of 2020, during the pandemic, MLKCH achieved an A rating from Leap Frog

The team utilized the numerous publications and resources provided by the Joint Commission and worked closely with their surveyors and the organization.

MLKCH continues to be worthy of celebration for reasons other than their reaccreditation.

In 2018 they organized a Sepsis Committee with a multidisciplinary team that included staff from a wide variety of departments and levels, including medical directors, emergency, critical care, nursing, pharmacy, and more.

“We identified ‘Sepsis Champions’ and an ED Sepsis Coordinator to collaborate with the staff and physicians to see how we could build standard work and system improvements,” de Leon said. Not only did sepsis levels fall dramatically, MLKCH was recognized as a 2020 Sepsis Hero by the Sepsis Alliance, the leading sepsis organization in the US. 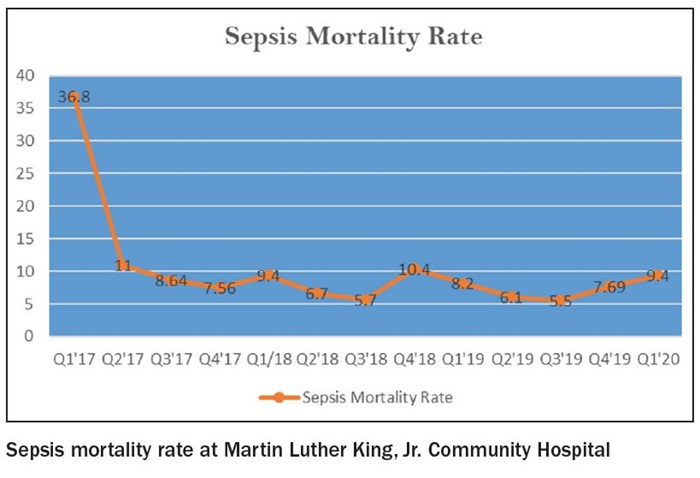 All hospitals felt the impact of the COVID pandemic — MLKCH even more so. In fact, CNN reported that the hospital was “the epicenter of the epicenter.”

“To say that we were hit hard by COVID is an understatement,” said COO Jeff Stout. “But our culture set us up for success. The staff have a ‘Never say no’ attitude. We faced any challenges head on and found solutions, and we are very proud of the grit and determination the staff showed even in the toughest times.”

With plenty of PPE on hand, the fifth floor of the hospital was converted to an ICU within eight days, telemedicine capabilities were expanded, and a new bilingual chatbot answered patient questions and directed them to care. With the help of donors, including the International Medical Corps (IMC), medical tents were built outside of the ED. The innovative ways with which they were used led IMC to use MLKCH as a model for other hospitals they support across the nation.

With a sterling reputation for readiness, adaptability and innovation, MLKCH continues to validate its role as a lifeblood of its community and celebrate the success of it’s larger, profound, and deeply felt mission.

This site uses cookies and other tracking technologies to assist with navigation, providing feedback, analyzing your use of our products and services, assisting with our promotional and marketing efforts, and provide content from third parties. Get more information about cookies and how you can refuse them by clicking on the learn more button below. By not making a selection you will be agreeing to the use of our cookies.