News and knowledge targeted for the hospital environment. 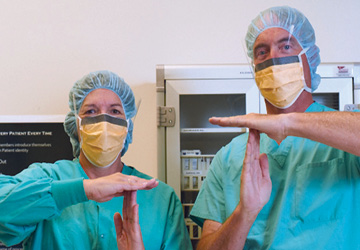 It’s customary for the Association of periOperative Registered Nurses (AORN) to invite members to reach out to legislators regarding the importance of implementing a time out prior to surgery for team members in the operating room (OR). This is now a well-established safety practice that empowers team members to introduce one another and confirm the correct patient, procedure and surgery.

This year is no exception, and June 9 is National Time Out Day. Our members are doing an exceptional job of reaching out to their local, state and national public officials and explaining the connection between the awareness day and the avoidance of wrong site surgeries that still occur approximately 40 times weekly.

These bills requiring use of surgical smoke evacuation systems are the result of a nursing advocacy campaign launched by AORN almost five years ago.
As explained in The Joint Commission’s Quick Safety Issue 56: Alleviating the Dangers of Surgical Smoke, research studies confirm that the surgical smoke plume can contain toxic gases and vapors such as benzene, hydrogen cyanide, formaldehyde, bioaerosols, dead and live cellular material (including blood fragments), and viruses. In some fields, such as orthopedics, dentistry and plastic surgery, it is also possible to generate particulates and metal fumes.

Health Concerns for OR Staff
The risk to patients having surgery inhaling contaminated surgical smoke is minimal but it’s a real concern to anyone working in ORs, i.e., perioperative nurses, surgeons and staff who inhale the smoke daily. At high concentrations, the surgical smoke causes ocular and upper respiratory tract irritation and creates visual problems for the surgeon.

Symptoms and conditions developed as a result of surgical smoke inhalation in the short term can include:

Over time, studies show that surgical smoke can cause in-vitro mutations and be a contributing factor to higher rates of pregnancy complications for female surgeons. There also is evidence that surgical smoke can transmit viable bacteria and human papillomavirus (HPV). In addition, serious lung disease, chronic asthma and cancer have also been attributed to long-term exposure.

Legislative Push During COVID-19
Since 2018, there’s been a push for legislation requiring the use of surgical smoke evacuations systems during certain procedures from surgical team members and professional associations:

Yet, in some ways, the COVID-19 pandemic accelerated discussions of anything related to air purification, despite shorter legislative sessions last year.

Legislators now had experience wearing masks themselves, so they could better understand the importance of respiratory health and safety. The clinician’s mask protects the patient in the OR and that concept seems easier to understand after a year of universal masking.

Discussions in Oregon were particularly dynamic in the wake of the wildfires. Advocates for surgical smoke evacuation laws used the tactic of asking legislators if they were comfortable being outside during the more intense fires. This frame of reference was helpful in communicating the dangers of breathing in contaminated environments.

One AORN member in Georgia was creative in illustrating his point by demonstrating himself surgically cutting into a steak, producing smoke and asking legislators to imagine the steak as a patient with a communicable disease.

These tactics are having an impact. In Illinois, SB 1908 requiring health care organizations to have a policy for surgical smoke evacuation is on its way to the governor’s desk for signature. And HB 2622 continues to work its way through the Oregon Legislature. Our work for similar legislation will continue across the United States until smoke in the OR is as unacceptable as cigarette smoke on airplanes.

As we observe another Time Out Day, we are encouraged by the wide acceptance of the time out in the name of safer surgery. It’s our hope that one day surgical smoke evacuation will be just as intuitive.

Jennifer Pennock is Senior Manager of Government Affairs for the Association of periOperative Nurses.