Just Do It: Rapid Naloxone Initiative is Needed Now 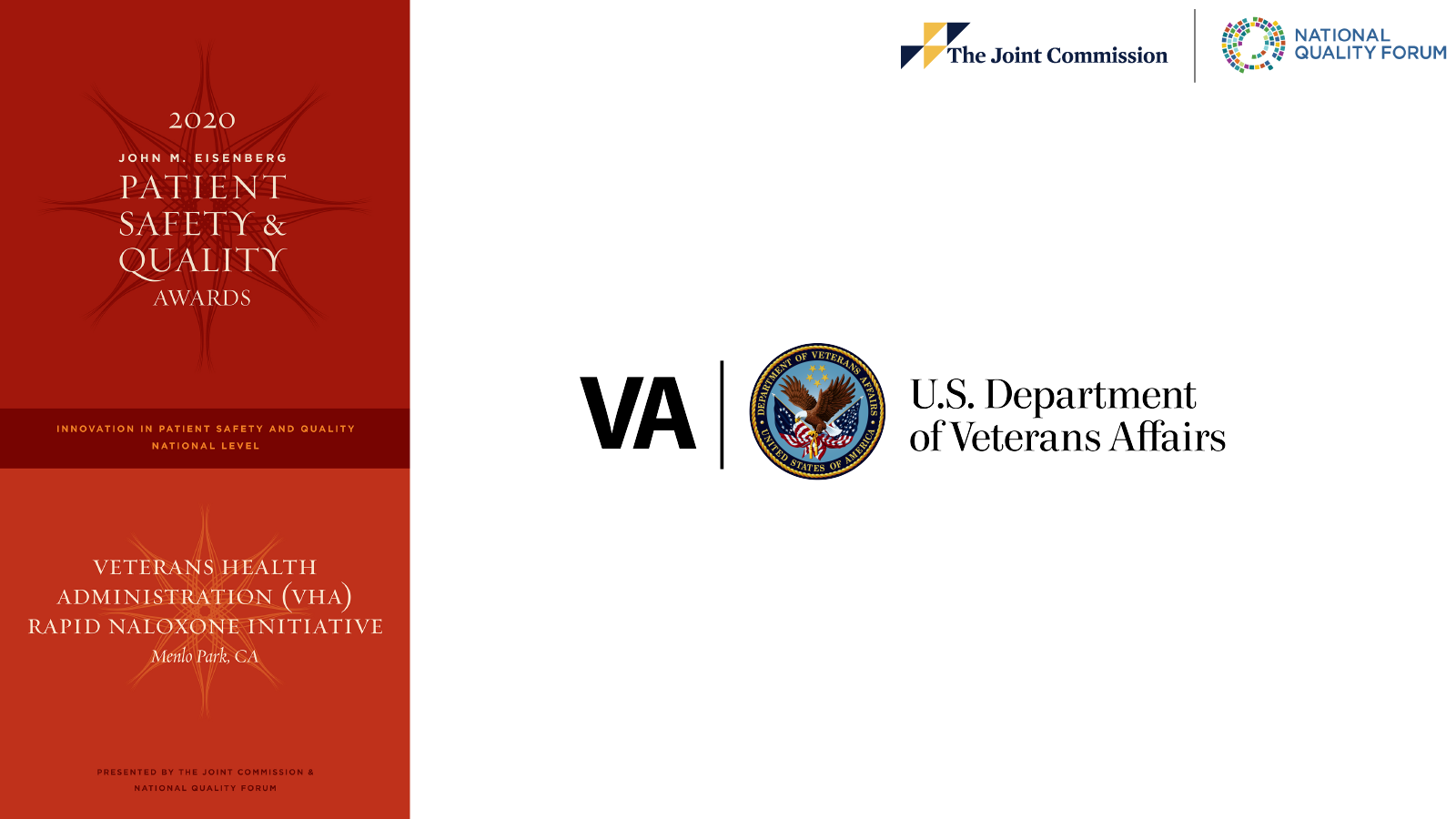 The Department of Veterans Affairs (VA) was recently honored with the 2020 John M. Eisenberg National Level Innovation in Patient Safety and Quality Award for its Rapid Naloxone Initiative. This effort works to prevent opioid overdose deaths among veterans by providing:

VA Boston Health Care System’s Shark Tank submission was the catalyst for the national Rapid Naloxone Initiative, and support from VA’s Diffusion of Excellence program and leaders and staff across the country are responsible for its success. As of July 2021, VA provided 301,084 veterans with naloxone and had 2,083 reported opioid overdose reversals. Additionally, 3,552 VA Police officers and 1,095 AED cabinets have been equipped with naloxone. Through VA Police and access to naloxone through AED cabinets, there have been 136 and 10 reported opioid overdose reversals, respectively.

Pandemic-Related Increase in Drug Overdose Deaths
Unfortunately, these accomplishments came on the heels of a heartbreaking report indicating the United States had experienced a 29.4% increase in drug overdose deaths between December 2019 and December 2020, escalating from 72,151 deaths to 93,331 deaths (a total of 21,180 additional deaths in 2020). Likely fueled by what has been described as an epidemic in the midst of a pandemic, the best way to understand this concerning statistic is to recognize that every day in the United States, approximately 256 people will die of a drug overdose. That is equivalent to one person dying every five to six minutes.

Knowing this, VA proposes a call to action: rapid naloxone is needed now more than ever. To assist in this call to action, VA has submitted an in-depth paper to the Joint Commission Journal on Quality and Patient Safety about the ways health care systems can incorporate rapid naloxone into their practice—including step-by-step toolkits to speed implementation.

In February 2012, Eliza Wheeler and colleagues published a landmark paper highlighting the effectiveness of community-based opioid overdose prevention programs providing naloxone. Among 53,032 individuals who received naloxone between 1996 to 2010, there were 10,171 reported opioid overdose reversals. The paper described how highly effective OEND could be. I reached out to Wheeler to learn more about OEND and how to implement these practices across VA. Wheeler’s response was, “Just do it.”

Wheeler advised that it’s not complicated. This notion was reinforced by other leaders, including those developing the evidence-base for OEND, as well as those implementing OEND in the then-novel settings of pain management with patients prescribed opioids (e.g., Phillip Coffin, Anthony Dragovich, Sharon Stancliff, Alexander Walley). For example, one of my most memorable experiences was being trained by Eliza in Spring 2012 at Ladies Night at the Mission Neighborhood Resource Center in San Francisco. Ladies Night was remarkable.  It included a variety of resources for women, such as a meal, clothing, OEND and sterile syringes. I observed true person-centered care when witnessing Eliza adapting her approach to OEND education to meet persons where they were at (e.g., persons who had never been trained, persons who may have been intoxicated, etc.). Through this experience I learned that OEND training on opioid overdose prevention, recognition, and response with naloxone only took a few minutes. The beauty of rapid naloxone is that a few minutes of training can save a life. It is easy to incorporate OEND into the workflow, and this can be improved upon by coupling it with other services.

Nearly a decade later, VA received an Eisenberg Award for its implementation of OEND and rapid naloxone broadly. In implementing rapid naloxone, VA has put that “just do it” guidance into practice. VA is hopeful that health care leaders can learn from these experiences, which are described in a forthcoming paper and VA’s Quality Enhancement Research Initiative (QUERI) Roadmap for Implementation and Quality Improvement. VA’s website also includes many materials, including resources for clinicians and the public.

VA is proud to be the recipient of the Eisenberg Award for the Rapid Naloxone Initiative. This honor is timely given that rapid naloxone is needed now more than ever. All health care leaders have a role in combatting the surge in drug overdoses that is the leading cause of accidental death in the United States. “Just do it.”

Dr. Elizabeth Oliva is the VA National Opioid Overdose Education and Naloxone Distribution (OEND) Coordinator and an Investigator at the VA Center for Innovation to Implementation. She led the VA Rapid Naloxone Initiative roll-out. She was honored to receive the Eisenberg Award on behalf of the VA at the National Quality Forum Annual Conference ceremony on July 20.