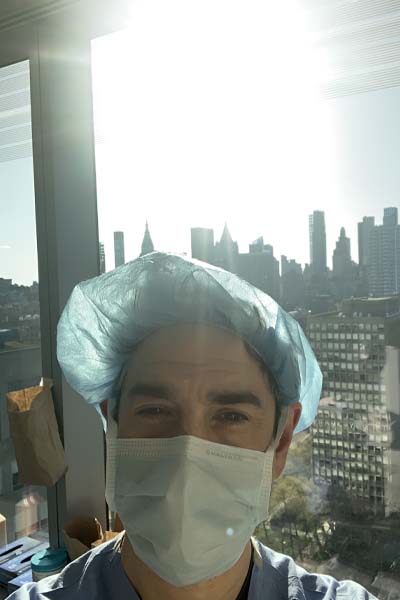 Being on the front lines during the pandemic in New York City was an experience like no other.

“Before COVID-19, it was not incredibly unusual, in an ICU setting, that somebody who is very, very sick has a family that decides at the end of life to withdraw care. What's really hard is to feel that you're meant to be their entire emotional support and the connection for that patient as they pass away because there's no one else there. That's a lot for anybody to process.”

“As attending physicians, we would often FaceTime the families or call them at night to give an update. I remember one person in particular that couldn't come because she had chemotherapy within the last six months. Unfortunately, her loved one, despite heroic measures, was not going to survive. At that point, the request was to be sure that she didn't die alone. So, the extraordinary thing was that the nurse and I were in the room and we made sure that we played a song that was meaningful to her and held her hand as she passed away, which was hard to watch.”

“To see an ICU full of patients, where it's likely they won't survive, and not have families there, really impacted the providers. We had a young nurse that came in crying at shift change. She said, ‘She just couldn't. This is too much. Everybody here is dying, and it's a really serious environment.’ Then she said, ‘I'm sorry. I can't handle it.’ And everybody said, ‘That's fine. You're the one who's responding to this how we all should be.’ We needed to be sure that we were really taking advantage of all the support we could.”

“Everybody responds to it differently. And as an organization, you need to provide the support for those providers. Where I was, that was the case, and I think it was really good, but, nonetheless, it's still overwhelming. It will be an ongoing thing. The support will be something that people will need going forward.”

“The commitment of everybody, from the people who cleaned the facility, who are essential to preventing the health care workers from getting further infected and stopping it from spreading further, to the radiology techs, to the pharmacy techs filling medications — the demands and how strained everyone was really impacted everybody. Again, from anesthesiology, attending physicians, cardiac surgeons, to the people who cleaned the floors, it was really just amazing to see them all pull together. I think just the incredible teamwork is what stood out, and I felt like the whole city of New York was really rallying during this crisis.”

“Every night the fire department, police department and the people of New York came and cheered the health care workers, and you could feel an incredible sense of teamwork and purpose and commitment. Commitment to mission is too bureaucratic a word for this. It's really just an underlying desire to do anything you can to stem the tide in this pandemic and to do what you've been trained to do.”

This site uses cookies and other tracking technologies to assist with navigation, providing feedback, analyzing your use of our products and services, assisting with our promotional and marketing efforts, and provide content from third parties. Get more information about cookies and how you can refuse them by clicking on the learn more button below. By not making a selection you will be agreeing to the use of our cookies.